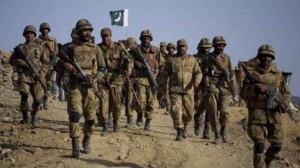 No fewer than 20 militants were on Friday killed in a clash with security forces in a tribal area in northwest Pakistan, state-run radio reported.

Three soldiers were also killed and 15 injured in fighting that erupted after more than 100 militants launched an assault on a security check post in the tribal district of Upper Orakzai Agency, the radio added.

The attack appeared to be aimed at avenging the killing of Tehrik-i-Taliban (TTP) deputy leader Waliur Rehman in a US drone strike in the North Waziristan tribal area on Wednesday, reports said.

TTP spokesman Ehsanullah Ehsan who confirmed the death of its deputy leader in the drone strike said on Thursday that the outfit has abandoned idea of talks with the government and would undertake revenge attacks.

The killing of the TTP commander apparently dealt a blow to prospect for negotiation with Taliban that emerged after the leadership of Pakistan Muslim League-Nawaz (PML-N), which is set to form government at the centre and the Pakistan Tehreek-e-Insaf (PTI), set to rule the northwestern Khyber Pakthukhwa province, voiced support for peace talks.

A key PML-N leader Chaudhry Nisar Ali Khan said Friday that the party would try to devise a national policy on drone attacks which are violation of national sovereignty.

Talking to media in Islamabad, he said that all stakeholders would be taken into confidence before announcing the policy on drone attacks, adding that drone attacks obstruct peace efforts as they help militants to muster support and sympathy from tribesmen due to civilian losses.