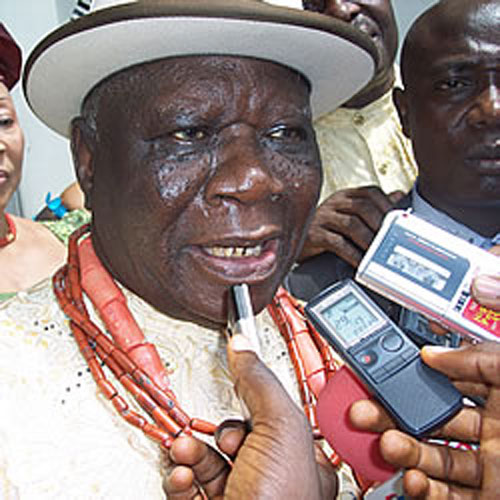 Elder statesman, Chief Edwin Clark, has declared that should President Goodluck Jonathan decide to throw his hat in the ring come 2015, he will win based on his achievements, but added that there would be no crises if he was defeated at the poll.

He also called for the probe of former Head of State, General Muhammadu Buhari (rtd), former Minister of Finance, Mallam Adamu Ciroma and other Northerners, over their ‘provocative’ and ‘more inflammatory’ statements, instead of just singling out Chairman of the Presidential Amnesty Programme, Mr.  Kingsley Kuku and former militant leader,  Alhaji Mujahid Dokubo-Asari.

In  an open letter to the Speaker of House of Representatives, Mr. Aminu Tambuwal, Clark said:  “I repeat, there will be no crises, if President Jonathan  is defeated at the presidential election in 2015, but he has a right to contest the election if he so wishes.

“For him to win, he has to implement some of the democratic dividends he promised Nigerians and  he has gone far in accomplishing same in some  areas,  such as stepping up power output to 10,000 MW by 2014, rebuilding external reserves to $45 billion, increased crude oil and gas revenue, massive rehabilitation of roads and general improvement in education, among others.

“With these achievements, President Jonathan is qualified to contest, and if he does, he is sure to win again. He has been able to achieve all these despite the promises by his political detractors to make the country ungovernable for him.”

However, Clark joined the lawmakers in condemning the statements credited to Kuku and Dokubo-Asari, expressing happiness that both men had denied the insinuations attributed to them.

Nonetheless, he was confounded that the House of Representatives appeared to be “one-sided and discriminatory because the House had not condemned similar provocative, seditious and more inflammatory statements made by some Nigerian leaders, especially Northerners, more so,  when the incitement arising from such statements are causing serious security problems in Nigeria today.

“We need peace in Nigeria and must support only a democratically elected government. You all know the stand of President Jonathan. For the first time in the history of Nigeria, presidential, National Assembly and gubernatorial elections were conducted in a free and fair atmosphere.

“President Jonathan said that no one should be killed for him in the name of elections. He believes in one man, one vote and Nigerians, reacting to his genuineness, sincerity and honesty of purpose, turned out massively to vote for him in 2011.”