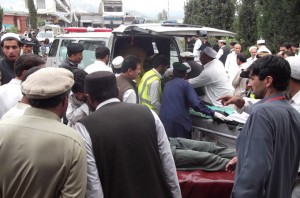 An explosion during an election rally in Kurram Agency for a Pakistani political party has left 25 people dead and scores injured.

A Jamiat Ulema-e-Islam (JUI) candidate, Munir Orakzai, is thought to have survived the bomb attack, which happened on Monday.

A government administrator for the remote region where the explosion took place said at least 50 people were injured in the attack, but that two party leaders escaped unhurt.

According to him, the bomb was planted inside the building that was the venue for the rally of two National Assembly candidates representing the JUI faction led by Fazul-ur-Rehman, a religious leader.

One of the candidates, Munir Orakzai, escaped unhurt while the other, Ain u Din Shakir, was slightly injured, the administrator said.

It was the first deadly attack on a political party in the tribal belt since campaigning began for what will be Pakistan’s first democratic transition of power after a civilian government has completed a full term in office.

Pakistani Taliban has taken responsibility for the attack.

“Basically it was an attack on Munir Orakzai, who was a part of the past government for five years,” Ehsanullah Ehsan, Taliban spokesman, told AFP news agency by telephone from an undisclosed location.

The tribal belt is a stronghold of armed Taliban-linked groups and Kurram has been dogged by sectarian violence between Pakistan’s Sunni Muslim majority and Shia minority.

The Pakistani Taliban has condemned the elections as un-Islamic and directly threatened the main parties in the outgoing coalition: the Pakistan People’s Party, the Muttahida Qaumi Movement and the Awami National Party.