3 Student Athletes, Including A Nigerian, Face R*pe, Other Charges 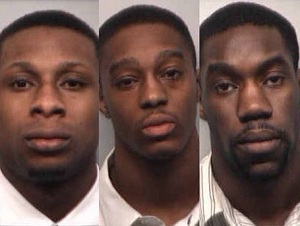 Several witnesses say the victim did have sex with several men in several rooms, and one witness says the victim used a drug. One witness also said the victim was drunk, dancing, fell and hit her head.Tevin Mgbo is looking at charges of aggravated sodomy, kidnapping and reckless conduct. According to court documents the incident involving those three suspects happened March 8 at the East Suites. The victim told police there was a party celebrating Spring Break and then they went to a club. The victim says she admits drinking some alcohol but says she did not use drugs, and does not remember much of what happened at the club or afterward.

One of the victim’s friends says he tried to help her but she would not allow it. He told police she kept hitting him and even picked up a knife and tried to stab him saying she knew what she was doing. He says the next morning the victim was unaware of what happened and he took her to the hospital. Another witness says some of the suspects came and confronted the victim about the rapè accusations. That witness said he told them “no one forced her to do it but she was not fully aware of where she was or what she was doing”.

Once campus police were told of the incidents, they identified and arrested the men.

As reported from Morehouse College, students who violate the school’s code of conducts and the law will receive disciplinary actions, which could mean dismissal from the college.

Morehouse College police and the Fulton County District Attorney’s Office are working together to investigate the case.