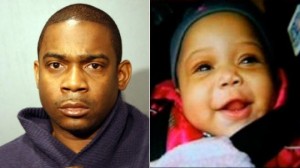 A Chicago man charged in the shooting death of 6-month-old Jonylah Watkins was ordered held Tuesday without bond.

Koman Willis, 33, of the 7800 block of South Saint Lawrence Avenue was charged with first-degree murder and aggravated battery with a firearm after he allegedly shot Jonylah and her father on March 11, according to police.

Police said Willis turned himself in with his attorney present around 4 p.m. Saturday and was charged at 2:45 a.m. Monday.

Police said Willis, a documented gang member who had been arrested 38 times prior to the shooting, was aiming at the infant’s father, Jonathan Watkins.

It is not clear why Willis suspected Jonathan Watkins in the burglary of the console, but McCarthy said it is not likely that Watkins will be charged in the theft due to “too many variables.”

McCarthy called the investigation a “milestone” and said he believes pressure from police led Willis to turn himself him.

“There came a point where we believed that we could take him into custody rather than just interview him, and we went out looking for him,” he said.

Despite original reports suspecting the shooting was gang-related, McCarthy said the incident was based on the burglary and not the father’s or Willis’ gang ties.

“This was a real hard one for the team,” said Lieutenant Kevin Duffin, who led the investigation. “It was a toll on everybody working on it.”

Duffin said last week detectives spoke with witnesses that led to information involving Willis, which along with police evidence led to his arrest. ”They were going to solve this crime,” McCarthy said.

Jonylah Watkins died March 12 after she sustained gunshots a day earlier to the thigh, shoulder, lung, liver and bowels on the 6500 block of South Maryland Avenue in Chicago’s Woodlawn neighborhood.

Jonylah was in the family van with her father when someone approached and opened fire, police said.
Friends and family gathered a week after Watkins’ death to remember the 6-month-old girl, who was fatally shot while sitting on her father’s lap.

“Jonylah, affectionately known as ‘Smooch,’ was loved and adored by many,” her funeral program reads. “Jonylah was the apple of her parents’ eyes. Jonylah had an infectious smile that continually warmed her mother’s heart.”

New Beginnings Pastor Corey Brooks said Jonylah is the youngest victim of gun violence he’s ever buried. ”It’s the youngest child I’ve ever had to be shot and killed, murdered,” he said. “That is totally different than anything I’ve ever experienced before and something I never, ever want to experience again.” Brooks thanked Chicago Police Monday after the charges were announced and said the family is very “grateful and thankful.”

“Hopefully they will be able to put this part behind them and go forward,” he said.