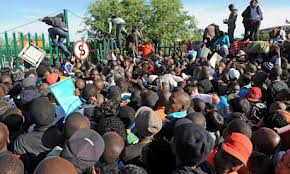 No fewer than four persons have been confirmed dead at the Spintex Road branch of the Synagogue Church of All Nations (SCOAN) founded by Prophet T.B. Joshua in Accra.

The tragic incident occurred after a stampede ensued at the church Sunday during the distribution of free holy water.

Greater Accra Police Public Relations Officer DSP Freeman Tetteh confirmed the death to Joy News and said the bodies of the deceased have been deposited at the 37 and Police Hospital mortuaries.

Some 13 persons were also severely injured during the incident, officials have said.

He said the incident happened around 8:30 am shortly after the announcement that the holy water was going to be distributed for free.

According to DSP Tettey, the church was advised by the Police to truncate the service, which they did.

Thousands of people had flocked the church in pursuit of healing, spiritual and financial breakthrough.

The holy water, according to many TB Joshua followers, is acclaimed to be the panacea to the many spiritual afflictions.

The church is yet to formally issue a statement on the incident.