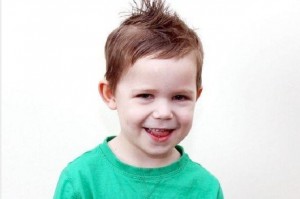 It took four years to diagnose him with nephrogenic diabetes insipidus – which afflicts just one in 25,000 people in the UK.

Sick Dominic Webster guzzles 20 litres of water a day to quench a raging thirst caused by a rare kidney illness.

It took four years to diagnose him with nephrogenic diabetes insipidus – which afflicts just one in 25,000 people in the UK.

The disorder means he is constantly thirsty. Now he not only drinks huge amounts of water each day but also has to stick to a low-salt diet.

Dominic’s left kidney is only functioning at 10% and he may need a transplant when he is older.

He has already had several operations and has to see hospital specialists every six weeks.

Mum-of-four Katie, 28, of Horwich, Greater Manchester, suspected something was wrong when Dominic was born and a scan eventually confirmed her fears.

She said: “I felt sad that he will be able to lead a normal but very limited life. He’s very clever and will say to people he has a kidney problem.

He has to have a diet low in salt, sugar and protein with few processed meats. He drinks up to 20 litres a day. When everybody at nursery is having cake and fruit drinks he can’t have them.”

But Dominic can eat most of the same meals as his siblings – Jordan, 11, Abigail, 10 and five-year-old Isabel – as his mum cooks his food in a different pan and without salt.