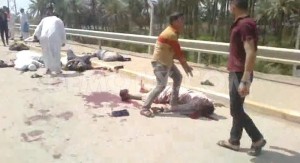 Two bombs near a Sunni mosque north of Baghdad have killed 40 people and dozens, police say, after two days of attacks targeting Iraqi Shia Muslims in which dozens died.

One bomb exploded on Friday as worshippers were departing the Saria mosque in the city of Baquba while a second went off after people gathered at the scene of the first blast, police said.

The violence raises the spectre of tit-for-tat killings common during the height of sectarian violence in Iraq that killed tens of thousands of people, and comes at a time of festering sectarian tensions between Iraq’s Sunni minority and Shia majority.

Television showed images of bodies on the ground outside the mosque, pools of blood and scattered shoes of the victims.

“I was about 30 metres from the first explosion. When the first exploded, I ran to help them, and the second one went off. I saw bodies flying and I had shrapnel in my neck,” said Hashim Munjiz, a college student, at the site. 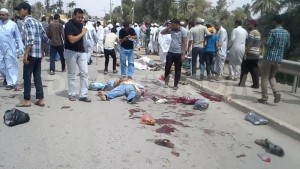 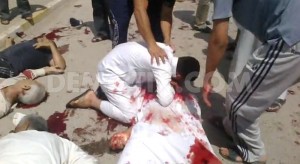 No group claimed responsibility for the attack.

Elsewhere on Friday, a roadside bomb exploded near a funeral procession for a Sunni man in Madain south of Baghdad, killing eight people and wounding at least 25 others, security and medical officials said.

Also in the northern city of Kirkuk, gunmen killed a government employee and one of his relatives, police and a doctor said.

The bombings were the latest in a series of attacks, in the last two days targeting Shias.

A suicide bomber On Thursday killed 12 people at the entrance of Al-Zahraa Husseiniyah, a Shia place of worship in the city of Kirkuk, where relatives of victims from violence the day before were receiving condolences.

Car bombs also hit three Shia-majority areas of Baghdad on Thursday, killing 10 people, while 21 people died in a series of bombings that mainly hit Shia areas of the capital the day before.

Armed men also shot dead the brother of a Sunni MP in Baghdad on Thursday.

The various attacks are indicative of worsening security conditions in the country.

April was Iraq’s bloodiest month for almost five years, with 712 people killed, according to the UN.