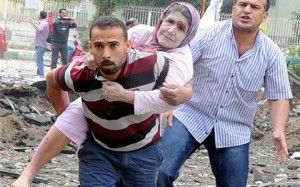 Two car bombs have killed 41 people and injured 100 others, as Turkey vows to take all measures against those testing the country’s power following the blast.

The blast occurred on Saturday in a crowded area of the small town of Reyhanli in the southern Turkish province of Hatay, just a few kilometres from the main border crossing into Syria.

Arinc said in comments broadcast live that Turkey must wait for the results of an investigation before deciding on any response. 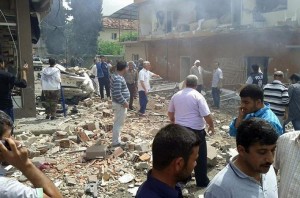 Hours after the twin car bombs struck, a third, smaller explosion caused panic, but NTV quoted Interior Minister Muammer Guler as saying that it was unrelated and occurred when a car’s fuel tank exploded. There were no immediate reports of casualties.

The area has been caught up in violence spilling over from the Syrian side in the past few months and the town is home to many of the more than 300,000 refugees who have sought shelter from the uprising against Assad that erupted in Syria in March 2011.