Five Yemenis were on Tuesday executed in Saudi Arabia, with their bodies displayed in public for killing a national and forming a gang that committed robberies across several towns in the kingdom, the interior ministry said.

A witness in Jizan told AFP that the five men were displayed in public near a university.

In a picture posted on Twitter, five men are seen hanging from a rope tied to their waists on a horizontal bar between two cranes. It was unclear if they were beheaded or shot. 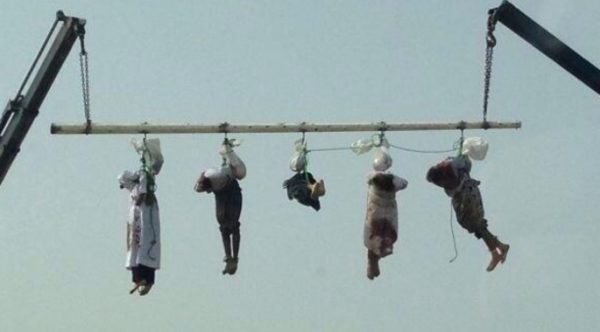 According to the interior ministry, Khaled, Adel and Qasim Saraa as well as Saif Ali Al Sahari and Khaled Showie Al Sahari had formed a gang which committed “several crimes in various regions in the kingdom and robbed stores.”

They also killed Ahmad Haroubi, a Saudi, by beating him up and strangling him, the ministry said.

76 people were executed in 2012, according to an AFP tally based on official figures. The US-based Human Rights Watch put the number at 69.

Rape, murder, apostasy, armed robbery and drug trafficking are all punishable by death under the strict Sharia law in Saudi Arabia.