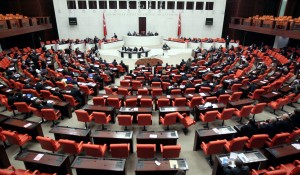 A controversial bill restricting the consumption and advertising of alcohol in the predominantly Muslim country has been backed by Turkey’s parliament.

The measure, passed on Friday, prohibits alcoholic beverage companies from sponsoring events and restricts the places where such drinks can be consumed. It also bans the sale of alcoholic drinks between 10pm and 6:00am, but only in shops.

The ban is however not total as the Health Minister Mehmet Muezzinoglu said bars and restaurants would not be affected. Open air bars and cafes would also continue to serve alcohol past 10pm.

Supporters of the measure – introduced by the ruling Justice and Development Party (AKP) Party, which has its roots in Islam – say the law is seeking to protect society, particularly children, from the harmful effects of alcohol.

TV series, films or music videos are not allowed to contain images encouraging the consumption of alcohol under the new legislation.

Drivers with a blood alcohol content of more than 0.05 percent will be slapped with a nearly $388 fine and their driving licenses will be confiscated for a six-month period.

Drunken drivers with a blood alcohol level over 0.1 percent will face up to two years’ imprisonment.

The law must be approved by President Abdullah Gul to take effect. He is expected to sign it soon.

Critics however see it as a sign of increasing conservative policies but Turkish secularists argue the legislation intrudes into private life.

Prime Minister Recep Tayyip Erdogan’s government, in power for over a decade, is often accused of creeping efforts to make the country more conservative.