The Department of State Security, DSS, yesterday, paraded nine suspected kidnappers and robbers including those who killed one DSS officer in Benin City, last year.

Parading the suspects before Governor Adams Oshiomole, the Director of the DSS in Edo State, Mr Bello Tukur Bakori described four of the suspected kidnappers as the dare-devils that have terrorized the state since 2009. Among the robbers is one said to be a specialist in demobilizing vehicles that have trackers.

“They are the gang that killed our staff and participated in the kidnap of an NNPC staff and a former Works Commissioner. Since their arrest, kidnapping has gone down in Edo State,” Bakori said. 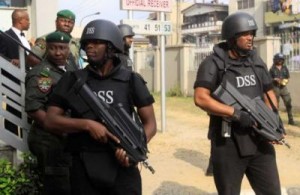 In his confession, the leader of the gang, Festus Idoro, who said he is from Delta State, disclosed that they made over N20 million from ransom.

Governor Oshiomhole who commended officers and men of the DSS who arrested the suspects expressed shock over the confessions of the suspects, saying: “Some of them have jobs so they cannot say it was unemployment that made them go into kidnapping or armed robbery.

“No matter what we may say, our law enforcement agents are working and I want to urge the media to give publicity to this kind of success.

“The challenge of security in this nation is a serious one and I want all of us to keep politics apart and to tackle our security challenges.”

“To an extent, it is also a relief to know that those who killed your colleague have been arrested. This is to send a message that armed robbers have no hiding place in Edo. You may run but one day you must be caught” he said.