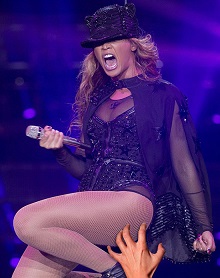 The 31-year-old singer was performing her hit single “Irreplaceable” at The Forum in Copenhagen, touching the hands of fans as she sang. As Beyonce turned during the performance, one fan within arm’s length took the opportunity to slap Beyonce’s blue bédazzled bodysúit-clad bútt — take a look in the video below.

Unsurprisingly, Bey was less-than-pleased by the action, telling the man, “I will have you escorted out right now, alright?”

Beyonce is in the midst of her Mrs. Carter Show World Tour, a set of shows that has been rife with drama. The Destiny’s Child alum canceled tour dates on account of doctor’s orders, and immediately took to her website to pen an apology to fans. The alleged health problems sparked rumors of Beyonce carrying her second child. Bey’s husband Jay-Z shot the rumors down in an email to Hot 97.

Beyonce is scheduled to continue her Mrs. Carter Show World Tour throughout the summer, hitting cities across the globe before wrapping at Brooklyn’s Barclays Center on Aug. 5. The singer appears on Kelly Rowland’s “You’ve Changed” alongside fellow Destiny Child bandmate Michelle Williams.