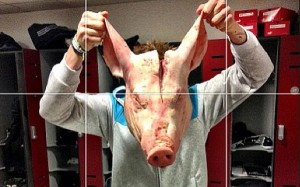 A pig’s head was found in the locker of Kenwyne Jones who strikes for Stoke City. The striker was said to be livid when he found it in his locker room.

‘A full internal investigation will be carried out. Those responsible for any unacceptable behaviour will be dealt with by the club’s disciplinary procedures’ said the club in a statement.

Kenwyne Jones’ girlfriend also didn’t find the incident funny. ‘Big men acting like kids. A pig’s head is not a prank, it’s just disgusting. I don’t get, how was that supposed to be funny. Really? Everyone is entitled to their own opinions. Mine is I don’t agree wrapping a pig’s head in his clothes’ she vented on Twitter.

Pranks like this are common in Stoke City. Michael Owen who will be retiring at the end of this season had his car covered by eggs and flour as ‘parting present’ by the players.