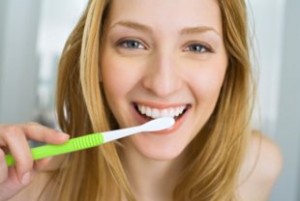 Step aside, Starbucks. Coffee lovers may be able to get a shot of caffeine right from the toothbrush, if a patent from Colgate-Palmolive goes through.

No need for the double latte down the street: That caffeine could be administered through a patch while you’re polishing those pearlies.

According to the patent application, “The present invention pertains to an oral care implement generally, and more particularly to a toothbrush that releases a chemical into the mouth during use.”

Other uses, aside from a nice boost of caffeine, include a delivery system for drugs, for weight loss or pain, for example.

The toothbrush could also be packed with a dollop of flavor, like berry, green apple, or lemon. Or it could provide an easily administered herbal remedy, such as lavender or chamomile.

The patch would attach to the head of the toothbrush, and a dose of the elixir would be introduced during brushing. The patch would last three months, according to the Daily Mail.

But having a toothbrush that does more than brush your teeth comes with risks: If you haven’t had your caffeine, you could make the mistake of picking up the brush with the chile pepper pack instead–yet another flavor suggested for the toothbrush invention.

“A chemical known as capsaicin, found naturally in chile peppers, can be used to provide a tingle,” suggests the patent application.