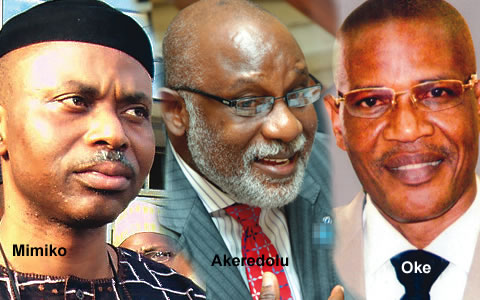 Following the ruling by the three-member Ondo Governorship Election Petition Tribunal on Friday which upheld the declaration of Governor Olusegun Mimiko as winner of the October 2012 governorship election in the state, the Peoples Democratic Party and Action Congress of Nigeria candidates – Chief Olusola Oke and Mr. Rotimi Akeredolu (SAN) respectively, have vowed to challenge the outcome at the Appellate court.

Chairman of the tribunal, Justice Andovar Kaka’an dismissed Akeredolu and Oke’s petitions for lacking in merit and their inability to prove all allegations raised beyond reasonable doubts.

However, in separate reactions, Akeredolu and Oke said their legal teams had been directed to start a fresh process to appeal the judgment.

Oke said, “The ruling fell short of the expectation of the Ondo State people and we shall challenge it at the Court of Appeal.

“The party is not surprised as we had earlier reported the compromising attitude of this panel, when it erroneously struck out the name of our party and vital paragraphs of our petition, which we challenged at the Appeal Court and our prayers were upheld.

“We are consulting as a party with our candidate, Chief Olusola Oke and the national leadership of the party and our legion of counsel on the next step we are going to take.”

Akeredolu, in a statement by the Publicity Secretary of the ACN in the state, Mr. Rotimi Agbede, also expressed his resolve to head for the appellate court.

He said, “It is rather unfortunate that the trial judges chose to close their eyes on the overwhelming oral and documentary evidences presented by the petitioners even when INEC principally refused to defend itself at the tribunal.

“The ruling of the tribunal, no doubt, had put the judiciary on trial in the open court of the people who relied heavily on the courts to dispense justice without fair or favour.”

But Mimiko said the verdict had confirmed that the Nigerian judiciary was living up to its role as the final impartial arbiter in all disputes.

He said, “We, as government, are mindful of the onerous task of meeting the development challenges of our people; we know that the fostering of understanding between the government and the people will engender a more conducive environment for the deepening of the dividends of good governance.”