The minister of education in Afghanistan has threatened to punish schoolgirls who claim to suffer from alleged “poisonings” that many officials believe are actually temporary psychological illnesses.

Over recent years, girls’ schools have witnessed mysterious mass faintings, nausea and similar symptoms that are often blamed by police and the local media on poisoning by Taliban insurgents or toxic gas leaks.

However, no laboratory evidence of poison or other toxins has ever been found at schools and no deaths have occurred, with the girls often released from hospital after only a few hours.

A recent case was recorded in Kabul, where 200 girls were reported to have been “poisoned” on May 1, causing an outbreak of screaming, stomach aches and vomiting. 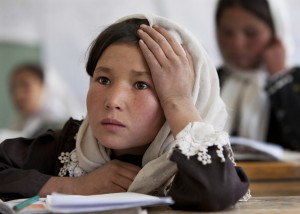 In a press conference on Tuesday, Education Minister Ghulam Farooq Wardak threatened to punish any student who complains of poisoning henceforth. “From now on, if I find anyone saying ‘I’m poisoned’ and the poisoning is not proved by the hospital, I will punish the student,” he said.

The education department said the government was determined to crack down on the causes of outbreaks of psychological illnesses among young girls.

“When one student faints, it spreads around and everyone might think it’s poisoning,” Mohammad Kabir Haqmal, spokesman for the ministry, told AFP.

“If tests prove it is mass hysteria or any other natural cause, of course no one will be punished. What the minister said was that we will pursue those who disrupt the classes.”

Criticism has followed the education minister’s stance from Wazhma Frouqh, a female education activist, who said that previous cases of “poisonings” had dissuaded families from sending their daughters to school.

“The minister should not have said that he will punish schoolgirls,” she told AFP. “His job is to find out what has happened and protect schools.”

Girls were banned from going to school under the Taliban, but numbers have risen since the extremist regime was ousted in 2001 and the government says 40 percent of pupils are now female. Frouqh believes the minister’s stance could push some girls out of school.