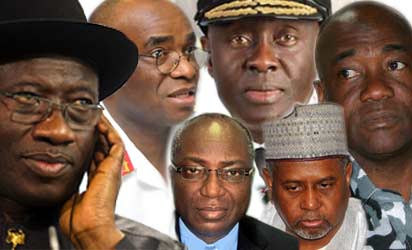 For the second time in four days, President Goodluck Jonathan on Monday, met with the National Security Council apparently in continuation of the assessment of the deteriorating security situation in the country.

The National Security Council which is made up of the Chief of Defence Staff, the Chiefs of the Army, Airforce and Navy as well as the Inspector General of Police and the Director General of the State Security Service, only last Friday met with the President who cut short his visit to South Africa and cancelled his state visit to Namibia in order to brief the President on the attacks in Bama in Borno and Alakyo in Nassarawa state that led to the death of scores of policemen men as well as other security agents.

As has become the norm recently with such meeting, yesterday’s ended without any formal briefing on what was discussed but there are feelers it may not be unconnected with fashioning effective means of checking the worsening security situation in the country especially the wanton killing of members of the security services.