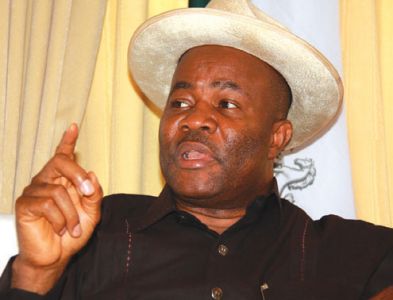 Some of the governors under the platform of the Peoples Democratic Party, PDP, one each from Labour Party, LP and All Progressives Grand Alliance, APGA, have rejected Friday’s election which produced Mr Rotimi Chibuike Amaechi of Rivers State as Chairman of the Nigeria Governors Forum, NGF.

The disgruntled Governors who converged on the Akwa-Ibom Governor’s Lodge, declared the election as a sham.

Led by the Chairman of the PDP Governors Forum, Obong Godswill Akpabio, the Governors stated that Amaechi stage-managed the election after he had refused to dissolve the former executive and personally conducted the election he claimed to have won.

Akpabio, who reversed the votes in favour of the party’s anointed choice – Jonah David Jang of Plateau State, revealed that Amaechi could not have won the election as Jang had secured 19 votes through his colleagues who had earlier in the day endorsed his candidature via their signatures gathered at the PDPGF meeting and the Northern Governors Forum meetings.

According to Akpabio,  who was flanked by governors Jonah Jang, Isa Yuguda of Bauchi, Ondo State governor, Olusegun Mimiko and Peter Obi of Anambra State, the election at the Rivers State Governor’s Lodge was against the dictates of democratic norms, adding that 19 governors who had earlier endorsed Jang recognised him as the authentic Chairman of NGF.

In a statement released to back up their assertion, the 19 members of the forum noted that they strongly agreed that Amaechi should go and thanked him for his services so far even as they affirmed Jang as the new chairman.