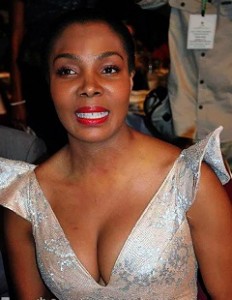 According to YES International Magazine: All the men who have dated and dumped Nike Oshinowo and Duro Soleye ‘s marriage crashes, the many men in her life.

Sweet and sumptuous ex-beauty queen, Nike Oshinowo, may soon give up on love. And in case you are wondering why, the reason is this: LOVE HAS NOT BEEN FAIR TO HER! Ever since she strolled into our consciousness in 1989, after winning the crown as the Most Beautiful Girl in Nigeria, she has been jumping in and out of relationships. However, we want to concentrate here on her most celebrated dalliances…

*KAMAL BOUSTANI: Mr. Boustani is a Lebanese businessman based in Lagos, Nigeria. Owner of Planet 44, Double 4 and K’s Place (all on the Island), the hairy dude who enjoys chopping cigar and rocking life had a wondrously rollicking time with Nike before they parted ways, leaving the shrewd guy with no other option than to marry a fellow Lebanese and a heart-broken Nike to continue with her love voyage.

*WADE CHERNAYKO: Another white guy who stole Nike’s heart. They were reportedly hooked up by billionaire businessman, Tunde Folawiyo and dated for years before going their separate ways and pursing other love interests.

*ATIKU ABUBAKAR: Though unconfirmed, Nike and Nigeria’s former Vice-President, Alhaji Atiku Abubakar were also paired as lovers. This was sometime in 2002, but nothing came out of it eventually.

*OBA ONILADO: The Oba son of the former Oba of Lagos, HRH Adeyinka Oyekan. The squint-eyed traditional ruler (Oba Mobolade Oyekan) who even conferred a chieftaincy title on Nike had his name mentioned in the time past as one of the ex-queen’s alleged lovers.

*TUNDE SOLEYE: The man who just severed romantic ties with Nike. Soleye trained as a medical doctor. Equally a businessman and socialite, many had thought that their union would be forever. Initially married to Funmi with whom he had three children, people are now speculating that with his separation from Nike, she may never try love again. 59 this year, the bearded and bespectacled Cross Bearer whose father owns the popular Duro Soleye Hospital on Allen Avenue, Ikeja, Lagos has always had it easy with women.