The crisis in Rivers State chapter of the Peoples Democratic Party took another turn on Monday with Governor Rotimi Amaechi inadvertently insinuating a plot to effect his removal by only five members of the state House of Assembly. 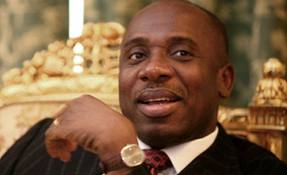 Rivers Commissioner of Information, Mrs. Ibim Semenitari, in a statement on behalf of Amaechi in Port Harcourt, said, “We are aware that people are imagining that it will be possible to attempt a (ex-Plateau State Governor Joshua) Dariye treatment in Rivers State where they will take just five members of the Rivers State House of Assembly out of 32 members and attempt an impeachment of the Governor of Rivers State.But the governor said it was practically impossible in today’s Rivers State to be removed by five members of a 32-member legislature.

“But this is Rivers State; this is not Plateau State and Nigerians are a lot more aware now than they were at that time. This democracy must stand and the people of Rivers State will defend every vote that they have cast for Governor Chibuike Amaechi.

“So, there is no way it is going to happen that a very tiny, insignificant minority in the Rivers State House of Assembly will be able to oust Governor Rotimi Chibuike Amaechi.

The Speaker of the state House of Assembly, Otelemaba Amachree, had last Thursday raised the alarm that the PDP executive in the state, led by Paul Obuah, were hatching a plot to cause confusion in the state by enlisting the five legislators to impeach the governor under the authority of a “fake mace” to be brought from outside the state.

The Obuah-led exco and the governor had been at each other’s throat with the PDP last Monday suspending 27 state legislators believed to be loyal to Amaechi from the party. It also queried the governor over the controversy surrounding the registration of an aircraft owned by the state government.

The court has however stopped the suspension while Amaechi has described the PDP query as “sad and laughable.”

Amachree on Monday postponed resumption of the House. The members were expected to resume on Monday from their recess but only the five legislators not affected by the annulled suspension appeared in the chamber.

The Speaker, in a statement, said he had to postpone the House sitting because of negative security report around the state House of Assembly.

He said, “Declare a state of emergency in Borno, Yobe and Kano, where Boko Haram and their collaborators are killing innocent men, women and children on a daily basis.

“We state again that Rivers is peaceful and that the symbol of democracy in the state, the Rivers House of Assembly, is peaceful and very orderly. Let the law enforcement agencies cooperate with us.”

Indeed, the atmosphere in the state was charged on Monday even as placard-carrying youths in their hundreds stormed the state House of Assembly in protest and demanded the impeachment of both Amaechi and Amachree.

Leader of the protesting youths, Mr. John Ogunda, said members of the House failed to follow due process in the suspension of Obio/Akpor council chairman, Timothy Nsirim.

The now-annulled suspension earlier slammed on the 27 state lawmakers by the PDP had been anchored on their removal of Nsirim.

Ogunda explained that the people of Obio/Akpor did not need a caretaker committee in the area, insisting that the governor and the Speaker must reinstate Nsirim.

“We do not need a caretaker committee chairman in Obio/Akpor Local Government Area. Nsirim did nothing wrong before he was suspended. We want him recalled,” Ogunda said.

However, a group, the Public Interest Lawyers League, has written to the Nigerian Civil Aviation Authority, in line with the provisions of the Freedom of Information Act, to demand records of the ownership of the controversial Bombardier jet, said to belong to the Rivers State Government.

The President of the PIL, Mr. Abdul Mahmud, disclosed this in a statement titled, “Between the Nigerian Civil Aviation Authority and Governor Rotimi Amaechi,” which was made available to journalists in Abuja on Monday.

Mahmud, in the statement, noted that Amaechi, or the foreign operator of the private jet, did not satisfy NCAA’s terms and conditions.

He said, “Whilst we are waiting on Governor Amaechi for answers to some of the questions we posed, we have meanwhile written an FOI letter to the Nigerian Civil Aviation Authority requesting: (1) record of title to or any interest in the private jet kept by the NCAA, pursuant to Section 7 (1) (a) of the Nigerian Civil Aviation Authority (Establishment etc) Act, 2004 and (2) record of registration and actual ownership of the private jet.”

The NCAA had on April 27, 2013, grounded the private jet at the Akure airport on the grounds that the aircraft lacked proper customs papers, as well as a manifest and flight plan.

The aircraft was also alleged to have an expired clearance certificate.

Amid the crisis, Amaechi on Monday, vowed not to abandon his ambition to seek re-election as the Chairman of the Nigerian Governors’ Forum.

Amaechi, as a PDP member, was believed not to have led the Forum in a manner beneficial to the party and perhaps the 2015 ambition of Jonathan. To counter the NGF chairman’s influence, the PDP floated its own governors’ forum presided over by Akwa Ibom State Governor, Godswill Akpabio.

An aide to the President, Ahmed Gulak, recently accused the Rivers governor of runnig the NGF like a trade union.

Amaechi, through his information commissioner, said, “The governor is neither dropping out of the race nor drumming up support for governor Kwankwaso as being speculated.

“He is focused and as a true believer in democracy and the rule of law, he is ready to cooperate and work with any of his colleagues that emerges the winner of the contest.”

No date has yet been fixed for the NGF election.