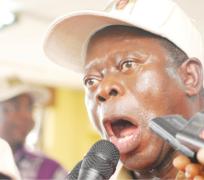 During the summit the governors drummed up support for President Goodluck Jonathan’s second term ambition.

Although Amaechi, the Chairman of Nigeria Governors’ Forum, was represented by his deputy, Tele Ikuru, Oshiomhole did not send any representative to the meeting.

The absence of the Rivers State governor at the meeting further confirmed speculation that he was no longer in the good books of President Jonathan, thus deepening the political rivalry between the two political giants in the South-South region.

Oshiomhole’s absence from the meeting might not be unconnected with his romance with All Progressives Congress (APC), while his counterpart in the fledging party and Governor of Imo State, Rochas Okorocha who showed up close to the end of the meeting, joined in the post-meeting press briefing.

Others at the meeting were all the South-East governors including Peter Obi (Anambra), Martin Elechi (Ebonyi), Theodore Orji (Abia) and Sullivan Chime (Enugu).

In their 12-point communiqué, the governors declared their support for President Jonathan’s transformation agenda, adding that his focused leadership and bold result-yielding transformation agenda deserves the unwavering support of all Nigerians and friends of Nigeria alike.

Chairman of South-South Governors’ Forum, Liyel Imoke of Cross River State who read part of the communiqué said the meeting was geared towards economic and political integration of the two zones.