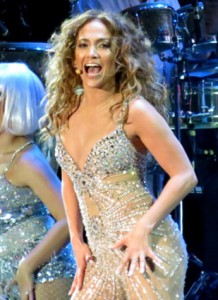 Step aside, dueling divas! The “American Idol” Season 12 finale will feature the return of Jennifer Lopez. This comes a week after reports surfaced that the former “Idol” judge is considering a return to the show’s newly revamped judging panel. The 43-year-old singer is set to perform on the “Idol” stage during the two-part finale.

“That door’s not closed,” Lopez reportedly said of her future on the Fox reality show.

But with all that icky diva drama between Mariah Carey and Nicki Minaj, will J.Lo’s flame fuel the fire? Some reports have suggested that the “On the Floor” singer tried to move in on Mariah’s position midway this season, but a source said Lopez “never suggested” that she replace Mariah.

No matter what, after this season’s negative “Idol” energy, the return of J.Lo to her old stomping grounds would be a win. (Heck, the only thing better would be the calming presence of Paula Abdul).

According to Deadline, Lopez will debut her new single “Live It Up” on Thursday’s “American Idol” finale, but it won’t be her first “Idol” finale performance. In 2011, J.Lo teamed up with then-hubby Marc Anthony for a sexy, Latin-infused performance of the song “Aguanile” (a timbale-playing Sheila E. was also in the house.)

“Now we know what they do at home!” a cheeky Ryan Seacrest exclaimed after the couple’s spicy performance.

While Lopez’s return to “American Idol” is highly anticipated, Thursday’s Season 12 finale also marks the end of judge Randy Jackson’s 12-year reign on the show. Last week the last original “Idol” judge announced that he was stepping down from his seemingly-endless judging gig at the end of this season.

In an interview posted by Splash News, Seacrest said of his longtime co-worker and friend, “I can’t imagine walking out, down those stairs, and not seeing Randolph Jackson sitting behind the panel.”

“It’s bittersweet because I love the guy,” the Seacrest continued. “Obviously I want him to go do what he wants to do… He’s been amazing on the show and had an incredible run, so I’m sad to see him go.”

Amid rumors of a massive “Idol” house cleaning, Seacrest revealed that he will be back next season. “I am coming back. Yes, I will host,” he said.