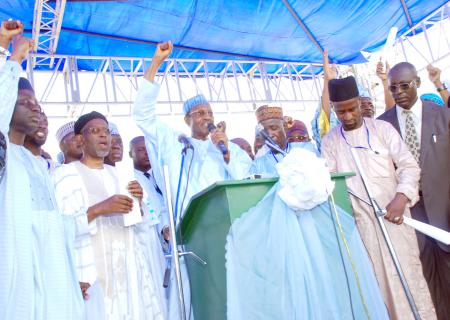 Former Head of State and de-facto leader of the Congress for Progressive Change (CPC), General Muhammadu Buhari (retd), has warned that Nigeria is reaching its elastic limit and breaking point with anarchy loming, unless something is urgently done to halt the trend.

Buhari was speaking yesterday in Abuja at the party’s winding-up national convention aimed at formalising the dissolution of the party and agreeing to merge with other opposition parties and political associations to form the All Progressive Congress (APC).

Buhari said at the convention which attracted a mammoth crowd to the Eagles Square in Abuja that, “Anarchy is knocking on the door of many sections of this country and the Federal Government has not demonstrated that it has the good sense to understand what is going on, or the competence to check it. The nation is hopelessly adrift. But, if we are to survive this vicious circle of violence that has engulfed this nation must be brought to an end. And we implore the National Assembly to take the lead in this quest for peace.

“This is a historic moment when several different political parties have resolved to come together to change Nigeria for the better and stop the mindless drift that has been going on for the last fourteen years. We must understand and accept that we are here gathered to make history or forever stand accused and condemned by it.

“The government has failed in almost everything. It has proved unable to secure the nation’s internal environment: there is widespread and rising poverty and unemployment across the length and breath of the country.

“There is spiralling lawlessness all over the country. There is a complete and total decline in the quality of social services and an irremediable dilapidation in the nation’s socio-economic infrastructure across board.

“Many political analyst have long stated that the only way to stabilize the country is for opposition parties to merge and oust the ruling PDP” just as he warned that henceforth, Nigerians’ votes must count and that the opposition would no longer tolerate the mayhem, which, according to him, the government allegedly created in order to cover up its guilt.

Amidst chants of “Nigeria, sai Buhari”, “Nigeria sai APC” the former military ruler reiterated the APC’s commitment to meet the yearnings and aspirations of Nigerians for good governance once it is voted into power.