Home Politics Any Governor Who Tries To Ridicule President Jonathan Does So At His...
Facebook
Twitter
WhatsApp 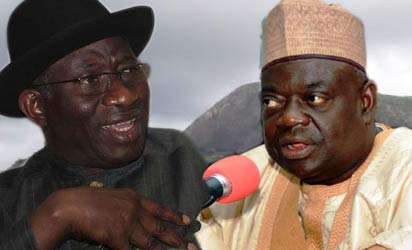 Niger State Governor, Dr. Mu’azu Babangida Aliyu yesterday said he was misquoted over his comments about the presidency on Monday.

Aliyu said he was misquoted when he was reported as saying “anybody who thinks, whether at the party or presidential level, can clip the wings of the governors is wasting his time.”

Speaking in Minna when he received last year’s hajj report from the leadership of the state pilgrims’ commission, Dr. Aliyu clarified his statement as “nobody can clip the wings of the governors.”

He said in his capacity as Chairman of Northern Governors Forum, he must protect the image of the governors and to make sure no governor ridicules the presidency.

“As Chairman of Northern Governors Forum I can go out of my way to protect the image of governors and make sure again no governor tries to ridicule the presidency… but again we must also make sure that we do not subject any governor to ridicule unnecessarily.

“None of us is fighting Mr. President and if any governor is fighting Mr. President on personal matter, we the governors are capable of dealing with that particular person at every level of our associations. We have the Northern Governors Forum, we have the PDP Governors Forum, we have South/East, South/West and South/south governors’ forums and I believe we are capable of handling situation like that,” he said.

The governor who banned sponsoring pilgrims to Saudi Arabia, said government would only provide subsidy of a certain percentage for the benefit of the state’s intending pilgrims.

Earlier, Chairman of the pilgrims’ commission, Mamman Mohammad, hailed the governor for giving the commission all the support it needed in carrying out its operations over the years.