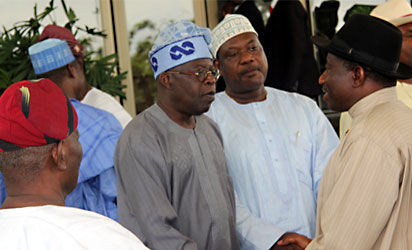 Special Adviser to President Goodluck Jonathan on Inter-Party Affairs, Senator Ben Obi, has said the merger of political parties under the banner of All Progressives Congress (APC), is in the interest of PDP.

Obi, who spoke recently in an interview at the foundation laying ceremony of a civic centre for Awka Ambassadors’ Club in Awka, Anambra State, stressed that neither the Peoples’ Democratic Party, PDP, nor the presidency was against the merger as widely speculated.

According to him, the Mr. Jonathan was rather pleased that opposition parties were coming together in the best interest of democracy.

“There is no truth in what people say about the president’s desire to destabilise APC.  It is clear that the PDP is an octopus and it is in the interest of smaller parties to come together and at least, give the PDP a run for their bigness,” the presidential aide noted.

While advocating a two-party system for Nigeria, Obi, who was once a running mate to Alhaji Atiku Abubakar under the banner of the Action Congress of Nigeria, ACN, in the 2007 elections, however, expressed fear that the merger might not stand the test of time considering challenges inherent in previous political mergers.

He also called on indigenes of Anambra North Senatorial District who are jostling to produce the next governor of the state to put their house in order if they hope to achieve their ambition.

“As at last count, there are about six or seven governorship aspirants from the zone, and this poses a problem.

“I have also heard that some of them are already lobbying to be deputies. They have to put their act together,” Obi said.