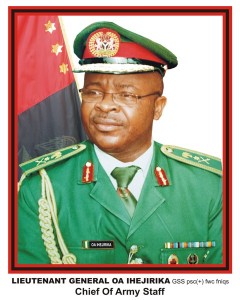 The Chief of Army Staff, Lt.-Gen. Azubuike Ihejirika, yesterday, said that soldiers who leaked information to terrorists about the movement of troops to Mali for AFISMA operations, have been arrested and are to face a military court martial. Soldiers were subsequently ambushed and two soldiers were killed along the Okene-Lokoja road.

Speaking at the 2013 Nigerian Army transformation seminar, Ihejirika noted that contrary to insinuations that the battle to dislodge terrorists from the North had led to shortage of troops for other operations; the Nigerian Army had enough manpower that was battle ready to undertake more challenges and tasks as may be directed by the Federal Government.

“It was through the work of the monitoring team in AFISMA operation in Mali, that we got to know that one of our soldiers fell sick and later, died. Let me at this juncture thank Mr. President for approving a Presidential Jet to bring home the body of the Sergeant from Mali.

“Presently, we are training 1,000 soldiers to become better and more effective amphibious soldiers for JTF operations in the Niger Delta. They will become better seamen. In this regards, the Navy has been of tremendous assistance by allowing us use of the Navy’s Amphibious training facilities.

“As I am talking to you, we have established a Battalion known as the 101 Reserve Battalion to be directly under Army headquarters. It will not be deployed for ongoing terrorism clampdown. It will just be on standby for any assigned task. Already out of the 100 percent requirements needed for its take off, we have met about 60 percent.

“This shows that we are ready and prepared to take on even more challenges. This also explains why in building capacity, we made it mandatory that all troops and officers coming out of depot and other military institutions must undergo counter-terrorism courses”.

Ihejirika said further that, “Since the end of military era and commencing of democratic rule, the Nigerian Army has not witnessed as much support and provision of accommodation facilities as we have now and this has impacted seriously on the morale of officers and soldiers”.

“Let me at this point warn against giving out vital information both at Army headquarters and formations level which put at risk, our operations or that of our troops. The consequences will be applied to the letter. A Soldier who gave out information that led to the killing of troops going to Mali has been arrested and will soon face court martial”.

“Some soldiers give out information through internet and online services that compromise the fight against insurgents and compromise our operations. I have directed the Directorate of Military intelligence and the Military Police to search for these officers, who should get appropriate punishment”.

In his address, Chairman, Senate House Committee on Defence, George Sekibo in his address assured that the release of the Boko Haram insurgents as directed by President Goodluck Jonathan was not to jeopardize the essence of the operation.

Sekibo said that the President in giving the directives might have seen ahead and as a politician, he has to protect the interest of the nation and that is why he is showing good faith in the state of emergency and not to witch-hunt anybody.

He commended the troops, assured that the administration was aware of their welfare challenges, saying that the National Assembly was working assiduously to ensure that their needs are taken care of.

“The professionalism, patriotism and selflessness with which our officers and soldiers respond to internal security challenges especially the wave of terrorism are both reassuring and commendable,” he said.