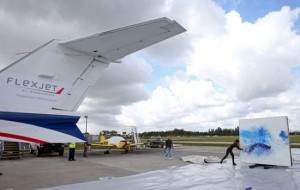 Florida-based artist Princess Tarinan von Anhalt creates abstract works of art by hurling cans and bottles of paint into the air and letting the strong winds produced by a jet engine splatter it onto a canvas. It’s probably the most expensive paintbrush ever used, but clients will often pay as much as $50,000 just to watch her work.

Jet Art, characterized by using a jet engine’s air currents to create abstract shapes on a canvas, was invented in 1982, by Prince Jurgen von Anhalt of Austria. After he passed away, his legacy was kept alive by his wife, Princess Tarinan von Anhalt, who became the first woman to use the unusual painting technique, in 2006. She has been using Jet Art to decorate pieces of clothing including sportswear, swimwear, luggage, and jeans, which she presents at various fashion shows, but using the power of a jet engine to create unique artworks remains the most impressive use of this intriguing yet dangerous practice. Last week, the artist was invited to celebrate the 50th Anniversary of Learjet, a private airplane brand, by painting 101 canvasses in just two days. Believe it or not, that’s a lot tougher than simply throwing paint into the air and letting the engine do the rest. Princess Tarinan von Anhalt has to endure winds several times stronger than a hurricane and temperatures that can reach 500 degrees Fahrenheit.

It takes more than a jet, a few cans of paint and a canvas to create Jet Art. The princess has to hire a pilot to follow her exact commands and power the engines just enough to apply the paint, as too much could send the artist flying into the air. She also has a crew of assistants who help her set the canvas and keep her stable as she positions herself in the tailwind. As you can imagine, Jet Art is pretty expensive for the average artist.

When Jurgen von Anhalt came up with the idea, it took him more than two years to convince a jet owner to loan it to him, but once he presented his first works to the world, they became popular in luxurious, celebrity circles. These days, Jet Art sessions are often commissioned as birthday surprise gifts among the rich and powerful, and Princess Tarinan’s manager says people will pay up to $50,000 just to watch her create an art piece.

‘I’m lucky and happy to use any jet that I can,’ the princess says. ‘I’m going to paint until i faint!’ She has at least five showings scheduled for this year, and is working out a deal to jet paint an expensive supercar. Her ultimate goal is to use the power of a jet to give another one a truly unique paint job.