Oby George, 50-year-old, confessed right in front of the members of the press that she and and other members of a baby-for-sale syndicate were helping women to deliver babies.

At the state Police Command, in Lagos woman said she had been in this business for over a year. She confessed that she had already helped women to deliever countless number of children through a very questionable method. Depending on the sex and number of babies her clients requests for, she is been paid between N1,500,000 to N3,000,000. 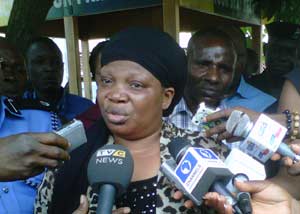 The bubble, however, bust when a 61-year-old Lagos-based woman, identified as Cecilia Adesope, who was allegedly delivered of a set of twins at the Port Harcourt delivery centre, was arrested by the police in Lagos, when she took the babies to a hospital for inoculation.

Embattled Oby said: “I am now ready to talk, because it seems we are hiding something here. Cecilia was brought to me by one Mr. and Mrs Peller. No… she was brought to me by Mrs Okoro, who is now at large. She has been treating her, and she pleaded with me to help her deliver a set of twin babies. That all her life she has not had any child of her own, that she is desperate.

“Mrs Okoro told me that we should use my apartment since her husband was around and she does not want him to know about this issue. So I agreed and N1,500,000 was paid into my account for the job. On her due date, she travelled down to Port Harcourt and we all went to my place. I gave her some herbs to chew after which she went to the toilet, when she got out, we asked her to lie down and push with all her might while I held her hands.

“At a point, we used a razor blade to give her some tear so that blood will come out and make the whole thing look real. Mrs Okoro then brought the babies, whom she had arranged from somewhere. That was when mama heard the cries of babies.”

On her part, Cecilia Adesope, told newsmen that she was brought to Oby by a woman still at large, believed to be Mrs Okoro, who had told her Oby would be able to help her. She said she was asked to go to Port Harcourt for delivery after she paying N1,500,000.

Cecilia said she was given some herbs after which she noticed her stomach getting bigger and she was convinced she was finally pregnant.

She said: “When I got to Port Harcourt for delivery on the date I was given, I was given something like a seed to chew. After I did, I felt like going to the toilet. When I got out of the toilet, I was asked to lie down and push with all my power.

“After that, I heard cries of babies. I also noticed some blood on my private part, and was given a pad to use. I did not go to the hospital during the pregnancy period, because I was instructed not to do so, as the hospital scan will not see the babies.

“When I returned to Lagos with my set of twins, I decided to take them to the hospital for inoculation injections. I don’t know what went wrong, but while we were waiting for the injection, the police came and arrested me.”

She told newsmen she has been married for 18 years without any issue, a dilemma that sent her everywhere seeking for the fruit of the womb, until she came in contact with Port Harcourt-based Oby Gorge.

Joy told newsmen how she met Oby, and what followed: “One of my neighbours visited Nigeria and heard about Oby. After she travelled back to the Unites States, she sent me Oby’s number and asked me to contact her if I am interested.

“I called up Oby and told her my problems. She gave me her address to come and meet her in Port Harcourt. When I got to there and met with her, she gave me some herbs, which I took and returned to Lagos. After sometime, I noticed that my stomach started getting bigger, and I believed I was pregnant.

“I was also asked to come to Port Harcourt when I am due to deliver. I have not gone to the hospital for scan, because the instruction given to me was that the scan will not be able to identify the babies in the womb. I paid her N2,700,000 for triplets.

“The only signs I have as a pregnant woman is my swollen stomach and legs which you can see. I still see my period sometimes.

“On the day I was arrested by the police, Oby had invited me to Port Harcourt for check-up, so she could ascertain if I am due for delivery. I went and she checked me. After that she said I was not due, that I have to wait for a little longer.

“But because it was late for me to travel back to Lagos that very day, she said I should pass the night at her house. I obliged. That was when the police came and arrested us. From what I am seeing right now, I don’t believe that I am pregnant despite my swollen stomach and legs.”

Information given to members of the press by the Public Relations Officer, Ngozi Braide, revealed that it took a while for Cecelia to be convinced that she did not actually deliver the babies, going by the supposedly pregnancy period and delivery experience she had.

It was also gathered that the babies have been taken to one of the orphanage homes in Lagos.