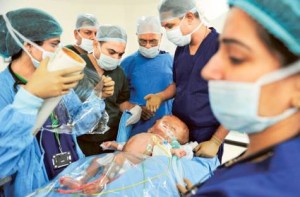 Doctors carried out life-saving surgery on Wednesday on an Indian baby suffering from a rare disorder that caused her head to swell to nearly double its size, in a case that aroused sympathy worldwide.

AFP was given access to film the surgery on 15-month-old Roona Begum, during which doctors used a surgical drill to pierce her skull before draining fluid from her head in an operation lasting more than an hour.

The youngsters’ parents, who have spent the last month at the hospital on the outskirts of New Delhi, spoke of their joy and relief after the operation which doctors described as exemplary.

“The surgery went perfectly, much better than expected,” neurosurgeon Sandeep Vaishya said in an exclusive interview with AFP inside the theatre.

“It’s definitely a success but it’s too early to say what the quality of her future life will be like,” Vaishya added.

Roona was born with hydrocephalus, a condition that causes cerebrospinal fluid to build up on the brain.

She was found in an Indian village last month living with parents who are too poor to pay for treatment.

Publication of pictures taken by an AFP photographer in the remote northeastern state of Tripura prompted a hospital, run by the private Fortis Healthcare group, to offer to treat Roona for free.

Vaishya, who heads the hospital’s neurosurgery unit, made a series of swift incisions along the right side of her head and stomach during Wednesday’s operation.

He then used a drill to pierce her skull before inserting a shunt, catheter and valve.

Doctors were then able to drain the fluid out of her head and towards her abdomen where it could be absorbed easily into the bloodstream.

Her father 18-year-old Abdul Rahman, who was too nervous to speak to the doctors on the morning of the operation, said he was “hugely relieved” that the surgery was successful.

“My wife and I were both so worried this morning. But now when the doctor says everything went well, I feel hugely relieved. It’s been a stressful wait,” Rahman told AFP.

When Roona was born, local doctors told her parents to take her to a private hospital in a big city but the costs were too high for Rahman, an illiterate labourer who earns Rs150 (Dh10) a day.

Roona’s condition had caused her head to swell to a circumference of 94 centimetres, putting pressure on her brain and making it impossible for her to sit upright or crawl.

On admission, Vaishya estimated her head weight amounted to half her total weight, leading him to believe that her body would struggle to absorb all the liquid if a shunt procedure were carried out immediately.

So he decided to drain the fluid from her head into an external plastic bag and continued the process until the circumference had shrunk to about 60 centimetres, allowing him to perform Wednesday’s surgery.

Roona regained consciousness soon after the surgery. The sight of her bruised and bandaged head provoked her mother, 25-year-old Fatema Khatun, to sob inconsolably until Vaishya reassured her of the operation’s success.

Vaishya told AFP the child would need further surgery to reduce the size of her head.

“While the shunt will keep the head from getting bigger, the head is still too large at the moment. We will remodel her skull, move the bones and fix them with plates to reduce her head size so she can grow normally,” he said.

The shunt surgery is the most common treatment for hydrocephalus, a condition that affects about one in every 500 children, according to the US government’s National Institute of Neurological Disorders and Stroke.

“Her neck muscles are very underdeveloped, so she will need more nutrition and extensive physiotherapy to make her stronger. Her body will have to grow strong so she can learn to sit up and move about and live a normal life.”

In an interview after his daughter was admitted to the hospital, Rahman said he had prayed constantly for a “miracle” to save his little girl.

“The day she was born, then itself the doctor said there were no guarantees she would survive,” he told AFP. “I figured we would do our best for as long as we could and Allah would help us with the rest.” [AFP]