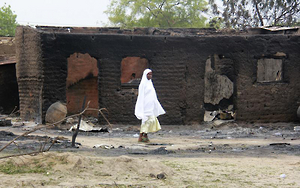 The preliminary reports on the Baga crisis in Borno State submitted by the Defence Headquarters and the National Emergency Management Agency (NEMA) to President Goodluck Jonathan, has been rejected by the Action Congress of Nigeria (ACN) which said that new evidence has shown that the investigation that produced the reports was shoddy.

Spokesman for the party Alhaji Lai Mohammed, in a statement yesterday, called for an urgent and independent investigation into the April 16 Baga carnage to establish the truth.

“Those who carried out that investigation apparently discountenanced the fact that in today’s world, nothing is hidden. Thanks to the satellite imagery released by Human Rights Watch on Wednesday, the world is now aware of the massive devastation that occurred in Baga,” he said.

“It is actually worse than what has been reported. The satellite images support the conclusion by the rights group that 2,275 buildings were destroyed in the clashes. They also seem to support the statements credited to the senator representing the area, Maina Ma’aji Lawan, who put the death toll at 220.”