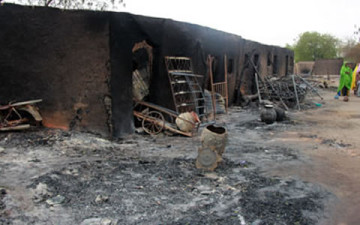 The US government has dispatched a team of State Department officials to meet with top Nigerian government officials this week in Abuja to determine the actual circumstances of the Baga massacre between Boko Haram terrorists and the Nigerian military, Information Nigeria has learnt.

While the US-based Human Rights Watch, has accused the Nigerian military for the massacre claiming that over 185 people were killed and thousands of houses destroyed, the Nigerian Ambassador to the US, Prof. Ade Adefuye, said the satellite pictures released by the human rights organisation were insufficient to determine who was responsible for the carnage.

According to what we gathered, the US officials were in a dilemma over which of the disparate accounts to believe, hence the team’s visit.

Adefuye, according to the report, has confirmed that the US government’s team would be meeting in Abuja with officials of the Nigerian foreign affairs ministry, Ministry of Justice and the National Security Adviser, among others over the Boko Haram issue and especially the recent Baga massacre.

The ambassador said the Nigerian Embassy had also met with the US team that visited Nigeria last week to review the situation.

“When they came here to meet with us at the embassy we made it clear that the claims on the casualties have been excessively exaggerated,” he said.