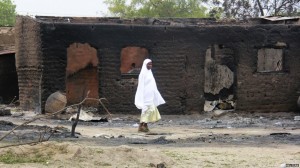 It would be recalled that only last week, a heavy fight ensued between the Nigerian soldiers and the Islamic sect, Boko Haram in Baga local government of Bornu state, killing over 200 people.

Kwankwaso who was in Maiduguri, the Borno state capital to commiserate with the government and people of the state described the incident in Baga as unfortunate.

According to him, the challenges currently being faced by Borno and Kano states in the wake of the ongoing insurgence was an act of God, stating that knowing the Governor of Borno and his desire towards maintaining peace, he had no doubt that, Borno would come out of the crisis.

“The leadership in Borno has gone a long way in ensuring peace, as such, the government and people of Kano state would continue to partner with Borno in pursuing peace to the latter.” He said

Responding, Governor Kashim Shettima said, since the crises started in the state, they had not gotten any support from governments or individuals apart from Kano state government.

He said, “we have been left on our own to swim and sink, but I promise you that Borno state would bounce back.”