Tito Vilanova believes he should not be judged on his first season in charge of Barcelona and should be given a chance to prove himself with a full season under his belt. 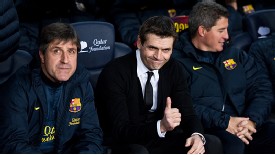 Following Barcelona’s 4-2 win over Real Betis on Sunday, which saw Lionel Messi come off the bench to score a match-winning brace, Vilanova suggested it has been a difficult season for Barcelona, despite the likelihood of them winning La Liga in the coming weeks.

Having spent two months away from the Nou Camp while undergoing cancer treatment in New York, Vilanova insists Barcelona will be more successful with greater stability at the club next season.

“One must improve and be self-critical. It’s been a tough year for injuries. The coach has not been around for over two months and it’s not been easy,” he said. “Tomorrow (on Monday) I’m off to New York and back on Thursday. It was all planned, and during this process you have to be in control of everything.”

Messi was substituted on for David Villa, who equalised for Barca just before he was withdrawn, and the Argentinean found the net just four minutes later before sealing the win with a tidy finish ten minutes later.

The 25-year-old took his season tally to 46 league goals and showed positive signs despite struggling with match fitness since sustaining a hamstring injury last month.

“The management of Messi’s injury allowed him to play this evening,” Vilanova said. “Maybe he’s not in top physical shape now because he hasn’t been able to train as much as his team-mates.

“We’ve demonstrated that we are a consistent team. If we had lost our focus, it would have cost us much more, but we’ve been playing well. Nothing has been given to us.”

Messi earned significant praise from his team-mates, with Andres Iniesta admitting the striker has been the driving force in Barcelona’s charge towards the title.

“God willing we’ll be champions soon. There aren’t words to describe the value of a title like this,” Iniesta said. “If the team suffers, the fans do as well, and vice versa. When we win titles it isn’t just for us, it’s also for the fans.

“There is a dependency on Messi because he’s a fundamental player, but the whole team is also important. Having him with us is always a positive thing.”

Defender Gerard Pique added: “We know that he’s the best player in the world, and we hope he continues to be for many years to come. He knows to be at the right place at the right time.”