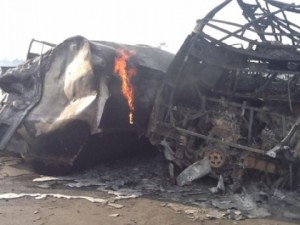 At least four persons were burnt beyond recognition in a ghastly motor accident in KareKare village, along Darazo road, about 30 kilometres from Bauchi metropolis. Five others also sustained injuries

Confirming the accident to newsmen on Thursday, the Bauchi State Federal Road Sector Commandant, Mr.Henry Sunday Olatunji said that the accident which occured around 7.45pm, involved a commercial Toyota Hiace bus and a mercedes benz 190.

“A total of 9 persons were involved in the accident. Among the victims of the crash are 8 males and a female. The number of casualities are 4 people out of 3 are males while 1 is a female.The 5 people that sustained injuries are all males,” the commandant said.

According to him, when men of the Federal Road Safety corps arrived at the scene of the crash, they conveyed all the dead bodies to Darazo General Hospital while the injured persons were taken to Soro Hospital.

Attributing the cause of the accident to overspeeding and reckeless driving, Olatunji urged motorists plying the highway to ensure that they observe traffic rules and regulation at all times.

“From our observation, the two vehicle may have been overspeeding and it is wrong to driving recklessly,most especially at nigth.Drivers should be more careful at nigth and ensure that all their headligths are functioning properly to avoid accident,” he said.