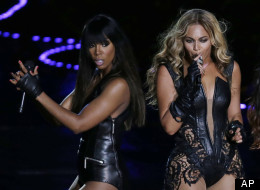 Kelly Rowland’s “Dirty Laundry” is an extremely emotional song that recounts the singer’s many struggles, from domestic abuse to pangs of professional jealousy. Beyonce’s to blame for the latter of those battles, as it seemed for some time that she — not Rowland or Michelle Williams — was the only singer to really deserve the title of Destiny’s Child.

Time, however, heals some wounds: Rowland (with the help of The-Dream, who co-wrote the song) sings her way through that pain (“While my sister was on stage, killing it like a motherf–ker / I was enraged, feeling it like a motherf–ker / Bird in a cage, you would never know what I was dealing with / Went our separate ways, but I was happy she was killing it / Bittersweet, she was up, I was down”). In an interview with a Washington Radio station (via ContactMusic), Rowland reveals that she played the song for Beyonce and Williams before releasing it.

Beyonce’s reaction is about what you’d imagine. “[She] was just like, ‘I never left.’ Which was so sweet. It was endearing. She heard how real I was and she was just like “I’m so proud of you.'”

And just “how real” is Rowland keeping it? Real enough to break down while performing the song at a concert in Washington D.C.

The trio have been spending quite a bit more time together lately (or, at least, their sound files have), as they recorded “You’ve Changed,” another Rowland track that features Beyonce and Williams. Of course, they also reunited (very) briefly during Beyonce’s Super Bowl halftime show.