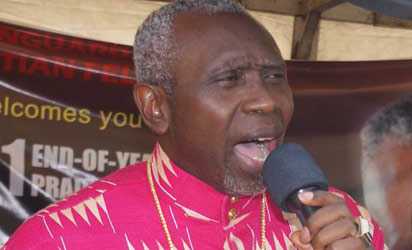 Founder of Word of Life Bible Church, Warri, Pastor Ayo Oritsejafor, has pleaded with President Goodluck Jonathan not to waste his time pampering members of the radical Islamic sect – Boko Haram, by granting them amnesty, saying it will not work.

Oritsejafor, who is the National President of the Christian Association of Nigeria (CAN), made this known in Abuja Thursday after he was bestowed with “A True Servant of God” award by the Christian Elders Forum of Northern States (NOSCEF).

The CAN President also urged the Federal Government to build cattle ranches for Fulani herdsmen instead of allowing them to roam around major cities and towns in the country.

Oritsejafor,who couldn’t hold back his emotions as he wept for victims of Boko Haram insurgency, flayed the arrogant and deriding manner with which Boko Haram members dismissed the amnesty deal, coupled with a statement earlier attributed to Abu Qaqa that the sect’s only objective is to eliminate Christians and enforce Islamic Law on Nigerians.

He said: “This is why we are again calling on President Goodluck Jonathan not to waste taxpayers’ money on a futile exercise.  He should review the amnesty deal for Boko Haram, in view of the bravado by the sect leader Mallam Shekau.  Boko Haram is not only a local terrorist organisation; it has a ring of international connection to it.  Do not waste time pampering the sect members because amnesty deal will not work.

“Permit me to call on President Jonathan to beware of some Muslim leaders in the north and their very few Christian allies, who always go to him in droves to seek regional concessions with religious biases;  people who do not see anything wrong in Boko Haram killing Christians but want amnesty for the murderous and bloodthirsty sect members.  Amnesty plan is aimed to divert the attention of reasonable Nigerians and the world from the cruelty of Boko Haram to Christians.”

Oritsejafor further advised the President to beware of those who were silent in the face of the Odi and Odioma as well as Zaki Biam massacres by soldiers in Bayelsa and Benue States respectively, but now want heavens to fall when Baga village came under military attack.

“The president should beware of those who kept mute when other Muslim leaders in the north said the country will be made ungovernable if he becomes the president in 2011, but want him to arrest Alhaji Mujahid Asari-Dokubo for repeating what they said earlier.  Such hypocrisy should never be tolerated in a secular country like Nigeria,” he stated.