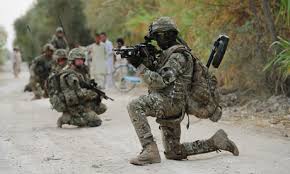 A representative of a government peace council entrusted with helping to start talks with the Taliban, Malim Shah Wali Khan was on Wednesday killed with a bomb and small arms, an Afghan official has said. The province’s deputy governor was also injured in the attack, Omaer Zawak, a spokesman for the governor of Helmand said.

A bodyguard also died and four others were wounded.

Zawak said the armed group first detonated a bomb next to Khan’s car and then attacked with assault rifles.

At least 12 people, including three British soldier, were killed by a roadside bomb in Helmand on Tuesday.

Six British soldiers have now been killed this year in Afghanistan, where British casualties have slowed over the past year.

In a statement, Major Richard Morgan, UK Ministry of Defence spokesman, said: “Security in Helmand, where most UK forces are based, is steadily improving, with Afghan forces already responsible for the bulk of the province – but the environment in which our troops operate remains risky and dangerous, including the threat of improvised explosive devices and insurgent attacks.

“We will continue to do all we can to minimise these risks but they can never be removed entirely.”

Helmand, which is the largest producer of opium in Afghanistan, has been the scene of the some of the fiercest fighting between NATO-led foreign forces and their Afghan government allies and the Taliban.

Fear is mounting that Afghanistan could be engulfed in turmoil after the pullout of most NATO combat troops by the end of 2014, although NATO and its partners are training Afghanistan’s 350,000-strong security forces to ensure peace can be maintained beyond 2014.

A presidential election is also due that year.