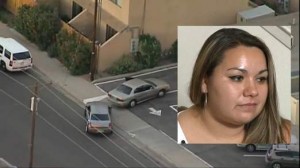 A mother chased down a man she suspected of abducting her daughter and then rammed her car into his vehicle, forcing him to flee on foot.

The four-year-old girl was playing in the front garden of an apartment complex in Albuquerque, New Mexico, on Wednesday when a group of teenagers saw a man forcing her into his car.

They alerted the Melissa Torrez, who got into her own car and gave chase – unaware that the suspect had pushed her daughter out of his car before fleeing the scene.

“I just thought, I’m not going to wait at my apartment for them to say, we still haven’t found her,” she told KRQE-TV.

“I’m going to look for that car and follow it.”

While a family member called 911, the woman tracked the silver Buick at high speed for about seven miles (11km) before ramming into it at a junction.

The young mother said she did not mean to hit the suspect’s car but struck it accidentally when she lost control.

The collision triggered a police manhunt for the suspect who had jumped out of his car and fled the scene on foot.

“He just threw his arms up at me and looked at me,” Ms Torrez said. “I got a good look at him so I could identify him.”

The girl was found uninjured near her home by her aunt.

David Hernandez, 31, was eventually arrested by police on Thursday afternoon and charged with kidnapping. He told reporters he was innocent of the crime.

Police are also exploring a possible connection between this incident and the kidnap and sexual assault last week of a six-year-old from the same apartment complex.

The suspect in that crime was described as a male in a silver or grey vehicle.