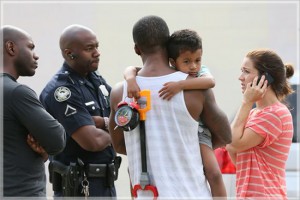 Hilary Grotewold was taking her 4-year-old son to pre-K when she stopped at a gas station to put air in a tire Thursday morning.

Grotewold said that was when a thief jumped into her SUV and took off on a wild ride with her son still buckled into his car seat.

The young mom’s worst nightmare occurred at the Racetrac station on Marietta Boulevard in northwest Atlanta just before 8 a.m. on Thursday.

“I was getting air in my tire and I felt the car start to move,” Grotewold told the Atlanta Journal-Constitution. “I thought I forgot to put it in park, and I realized it was going too fast for that, so when I looked up, there was someone in the driver’s seat and I realized it was being stolen.”

Without concern for her own safety, Grotewold sprang into action to save her son.

The heartless car thief ignored Grotweold’s pleas and sped out of the gas station — with Grotewold giving chase on foot. “I chased him down the street and started yelling, ‘you have my baby, you have my baby.’”

Thankfully, the thief pulled into the parking lot of a nearby CVS pharmacy and abandoned the vehicle with the boy inside.

“Luckily, I think he just wanted my purse and my cell phone so he took all of that and ran off,” Grotewold said, adding that her son was safe, but “just really scared.”

Atlanta police described the suspect as a black male wearing a gray hat and carrying a gray backpack. He was last seen running east on Marietta Boulevard toward LaDawn Lane.

Grotewold was shaken but relived to have her son back. “When something like that happens to your baby, you just want him to be safe,” she said.