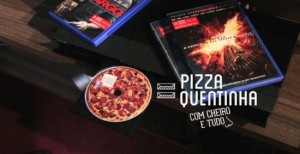 Pizza and movies are a popular combination, so Domino’s in Brazil decided to mix the two in a single package – a heat-sensitive movie DVD that looks and smells like their delicious pizza.

Domino’s Pizza teamed up with Brazilian advertising agency Artplan to create a truly ingenious campaign for their popular products. Taking advantage of the fact that movie rental stores are still very popular in the South American country, the creative minds at Artplan used thermal ink and flavored varnish to transform 10 new release titles such as Argo, 007, Dread and Dark Knight into appetizing disks that looked and smelled like pizza. They partnered with 10 video rental stores in Sao Paulo and Rio de Janeiro which distributed the media to unsuspecting clients. The DVDs were painted in black thermal ink and featured the movie title, but once the heat emitted by the player started affecting them, they gave away a pizza smell, and the black coloring was replaced by a delicious looking pizza image and the message “Did you enjoy the movie? The next one will be even better with a hot and delicious Domino’s Pizza.”

With video streaming more popular than ever, Domino’s idea might seem a bit outdated, but ArtPlan art director Diogo Barbosa explains that ”in Brazil streaming services like Netflix and iTunes are relatively new, and for people with good social conditions. Also our broadband connection isn’t as fast as that used in the U.S., and because of that we still have video rental stores in your neighborhoods.”