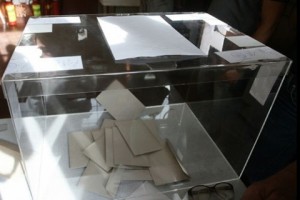 Bulgarians are voting in a tight and tense snap election, marred by accusations of rigging and is expected to result in political stalemate and fresh protests in the EU’s poorest member.

The country’s 6.9 million eligible voters are choosing between the candidates of 36 parties in Sunday’s parliamentary elections.

Voter apathy is widespread in a campaign that has also been overshadowed by an illegal wiretapping scandal and allegations of fraud. Turnout is expected to be under 50 percent.

Former bodyguard and ex-premier Boyko Borisov’s conservative GERB party was tipped to win the most votes, even though the biggest demonstrations in 16 years forced his government to resign only three months ago.

Last-minute opinion polls however gave GERB just 29 to 35 percent of the vote, well short of a majority and nowhere near enough for a repeat of Borisov’s previous minority government when his party was just four seats short of a being able to govern alone.

The polls showed the socialist BSP party snapping at GERB’s heels on 25 to 32 percent, with some surveys putting them neck-and-neck and even suggesting the BSP might pull off a surprise, if slim, victory.

Either way, this will leave either party the tough task of fishing for coalition partners in a severely fragmented parliament that might include up to five other parties.

The run up to the election has been overshadowed by scandals.

The seizure sparked accusations of fraud by the opposition against Borisov.

Socialist party leader Sergey Stanishev said that the discovery was preparation for total falsification of the elections, which he said corresponded to 10 percent of the expected turnout and ensure about 25 politicians’ seats.

“This is a scandal unseen in Bulgaria so far,” Stanishev said.

As he voted on Sunday in Sofia, he said: “I am ashamed as a Bulgarian and this is why we took all possible measures to overcome this forgery and not to let it happen any time in the future because this is not European.”
The papers in Kostinbrod, 15km northwest of Sofia, the capital, exceeded the number that the privately owned printing company Multiprint was under contract to print.

Elsewhere, the election campaign was marred by revelations of illegal wiretapping of politicians, with prosecutors alleging that Tsvetan Tsvetanov, the former interior minister, was responsible for illegally eavesdropping on political opponents during his term.

The scandal deepened as wiretaps leaked in the media revealed that Borisov allegedly had summoned Sofia’s chief prosecutor to discuss details of the bribery probe, leading to suspicions of government interference.

More than 250 international observers will be monitoring Sunday’s election.

Asked about the forged ballot papers the leader of the Organisation for Security and Cooperation in Europe’s observer delegation said they were waiting for an official investigation.

“It’s not for us to investigate these matters. It is for the Bulgarian authorities, but we will be interested in their assessment of the situation and how they deal with the matter as reported,” Eoghan Murphy said.

Opinion polls suggest that the eavesdropping scandal has further eroded support for the former ruling party.

A party needs to garner more than 43 percent of the actual votes to hold a parliamentary majority. [ALJazeera]