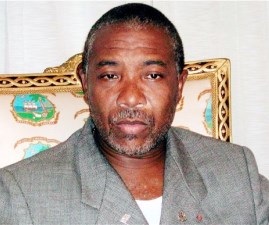 According to a story in Encomium magazine, the family of former Liberian president and war crimes prisoner, Charles Taylor, have been ejected from their N2.5million per year rented mansion in Diamond Hills in Calabar, Cross Rivers state. The family he left behind in Calabar as he faced criminal charges in The Hague were ejected because they were unable to per their rent. The house belongs to Dr. Joseph Wayas, the Second Republic Senate President.

His wife and kids, who have since been abandoned by the former president’s friends and business associates, now live in a small flat at the state housing estate along Murtala Mohammed highway in Calabar. No aides, no cruising of luxury cars, no partying, no money to spend lavishly. That’s their new life now.

Charles Taylor was forced to resign as president and take up political asylum in Nigeria. He arrived Nigeria with his family on August 12, 2003 but was extradited in 2006 to stand trial for war crimes.

In 2012, he was found guilty of all 11 counts of “aiding and abetting” war crimes and crimes against humanity.