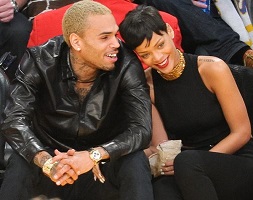 Shocker! Once again, Chris Brown and Rihanna have parted ways, romantically speaking — so said Brown during a recent interview with Australian radio show The Kyle and Jackie Show.

The “Don’t Wake Me Up” crooner, who turned 24 on Sunday, May 5, was detailing his multiple birthday celebrations (in L.A., Las Vegas and NYC) when he was asked about his chronically on-again, off-again love Rihanna, 25.

“Imma do it solo,” he said, citing his erstwhile girlfriend’s touring schedule, compounded by his own full slate. “I mean, at the end of the day, shawty doing her own thang, she on the road. It’s always gonna be love. I’m a grown man, just gotta fast forward.”

The love’s certainly not gone, he reiterated, but personal and professional commitments make the relationship too difficult right now, he said. “I’m always gonna love that person. I cant be focused on wife-ing someone that young. I need to be the best Chris Brown I can be,” he explained.

Indeed, Brown reunited with his other on-and-off love, Karrueche Tran, during his birthday bash in Hollywood last Friday — but, alas, according to an onlooker, “He didn’t appear to be paying much attention to her and was partying around a lot of girls.”

Adds a source close to Rihanna of the latest split: “Of course tomorrow they could be all over each other again, but for now she’s done and just living her life and touring. It’s how it always is.”