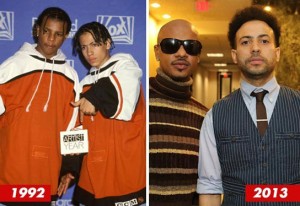 Chris Kelly, (pictured left in both photos) a member of the famous 90’s rap group, Kris Kross, has died. He was 34 years old. Chris, also known as Mac Daddy, was found unconscious in his Atlanta home yesterday afternoon and was rushed to the hospital where he was pronounced dead. A police spokeswoman said it appears it may have been a possible drug overdose. Sad. May his soul rest in peace. Amen.