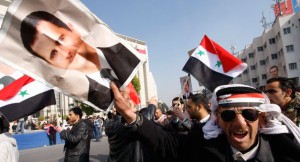 The European Union nations are yet to agree on whether to ease sanctions against Syria to allow for weapons shipments to rebels fighting the regime of President Bashar al-Assad.

While Britain is in support of relaxing the arms embargo, some members that feel more weapons would only increase the killings and tarnish the EU’s reputation as a peace broker disagree.

German Foreign Minister Guido Westerwelle said it was not clear if the EU foreign ministers, meeting in Brussels, would reach an agreement on the issue.

“The positions are far apart,” he said on Monday.

More than 94,000 people have died since the uprising against Assad’s regime erupted in March 2011, according to the latest UN figures.

Both sides have agreed in principle to enter direct talks in the Swiss city of Geneva next month, backed by both the US and Russia.

Several nations say that arming the opposition would create a level playing field that would force Assad into a negotiated settlement.

“It is important to show we are prepared to amend our arms embargo so that the Assad regime gets a clear signal that it has to negotiate seriously,” William Hague, UK foreign secretary, said.

The date, agenda and list of participants for the so-called Geneva 2 conference remain unclear, and wide gaps persist about its objectives.

The opposition Syrian National Coalition, which has been meeting in the Turkish city of Istanbul since Thursday, has yet to reach an official position on the peace initiative.