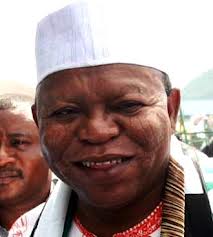 As Kogi State prepares to hold its council polls on Saturday May 4, the state chapter of the Action Congress of Nigeria has threatened fire and brimstone if the state Independent Electoral Commission (KOSIEC) refuses to heed to its advice to ensure a level playing field by displaying the voters’ register within the stipulated time.

Speaking to journalists yesterday in Lokoja, the ACN leader and former governor of the state, Prince Abubakar Audu, said there is proof that KOSIEC was allegedly making plans to divert election materials on the day of election.

Flanked by the ACN chairman, Mr. Haddy Ametuo and the Congress for Progressive Change (CPC) Chairman, Mohammed Mobo Kassim, Audu stated that any attempt to short change the electorate was capable of breaching the peace in the state.

He said election materials meant for about six local government areas comprising Ofu, Dekina (where the incumbent governor hails from), Ijumu, KotonKarfe, Olamaboro, and Idah; where the opposition have comparative advantage, would be diverted on election, to deprive the people of the chance to vote candidates of their choice.

While declaring that the issue of display of voters’ register was a constitutional order that cannot be discarded, Audu warned of a possible breakdown of law and order, if the elections are manipulated by the ruling party.

The ACN said part of the plans to rig the election by the PDP include the use of fake Army and Police personnel to hijack the ballot boxes but warned that the party will vehemently reject the move.

It also alleged that in its bid to rig the election, the PDP-led government in the state substituted the electoral officers of Ijumu and Adavi Local Government Areas respectively because they refused their biddings

“We are ready to give fire for fire, pebble for pebble and stone for stone and make the state ungovernable,” the party warned.