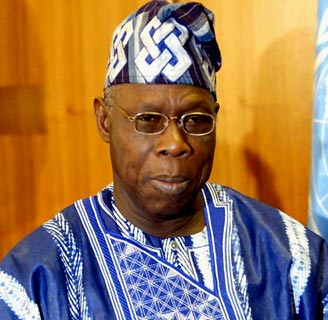 Former President Chief Olusegun Obasanjo has said he does not believe in the Federal Government’s Subsidy Reinvestment and Empowerment Programme, SURE-P, chaired by Dr Christopher Kolade.

Obasanjo, who was special guest at the book launch of ‘Kolade’s Canons’; a collection of lectures delivered over the years by Dr Christopher Kolade at the Nigeria Institute of International Affairs, NIIA, Lagos, lampooned the SURE-P, saying it was an initiative he did not understand.

Said he: “I have said it publicly and I will never stop saying it that his service as the High Commissioner to Britain at the time he agreed to be exported, made tremendous impact and helped me and my administration. I don’t know about SURE-P. People come to me but I have not sent anybody to you. I have got many people who have come to me and said ‘send me to Christopher Kolade, he is in charge of the SURE-P’. I don’t know what is SURE-P.

“When he (Kolade) was celebrating his 80th birthday, those who had misgivings about him taking up that assignment challenged him and he gave satisfactory explanation. If he does not give it, those of us who have complaints, won’t understand.

“I am a complainant about the situation in my country. If we don’t feel concerned about what is bad, you would not have brought about what is good. You have to be able to identify what is not right and complain about it and speak about it. Don’t just complain and speak, try and prescribe the alternative. You know whatsoever you do in this country, I will support you”.

Commending the former Nigerian High Commissioner to England for assisting his administration, Obasanjo described him as a gift not only to Nigeria but also to humanity.

He said: “I will never be tired of showing up on anything that concerns Christopher Kolade. Kolade said I cannot be here and not be heard and I said well, I won’t say much but I will just concur with what everybody has said. But when I told him that ‘you may not like what I would say’, then he warned me that he would speak after me.”