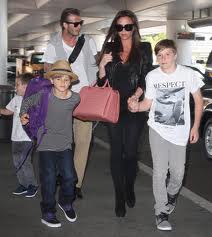 It was a sunny Memorial Day in LA for Victoria Beckham and her kids Romeo, Cruz, and Harper as they shopped around The Grove with Tana Ramsay and her youngest daughters, Holly and Matilda. The group made multiple stops, stocking up at Dylan’s Candy Bar, Nike, and the American Girl store during their outing.

The Beckhams arrived back on the West Coast just in time for the holiday weekend, and Victoria tweeted her excitement, writing, “It’s good to be back!” David Beckham met up with his family yesterday when he caught a flight into LA. The group has been stationed in London while David finished out the soccer season with Paris Saint-Germain.

The team wrapped up its last game on Sunday, though David didn’t attend, having played his final match during the home game last weekend. David’s family was in the stands to support him on the emotional day, and while he may have put his sports career behind him, it looks like he’s still going strong with other projects. David promoted his H&M underwear line last week in Paris, though he unfortunately kept his shirt on for the press stop.