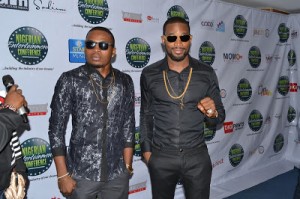 The kokomaster, D’banj and Olamide have been spotted severally leading to speculations that D’banj is planning to sign the younger artiste to his record label.

Olamide who raps in Yoruba language has appeared three times on D’banj’s record, was seen with D’banj at the first Nigerian Entertainment Conference and would be performing at D’banj’s DKM concert.